For the crumble layer

Preheat the oven to 190 degs C/gas mark 5. Cut the apples into large chunks, put them in a pan and toss with the butter and approximately two tablespoons of water over a moderate heat. When the apples start to soften but are still keeping their shape, tip them into a 1.5 litre baking dish. Mix together the breadcrumbs, sugar and chocolate and coverthe apples loosely with the mixture. Melt the butter with the golden syrup in a small saucepan and pour it over the crumble mixture, making certain to soak them all. Bake for 35 minutes until the apple is soft and the crumbs are golden and crisp. 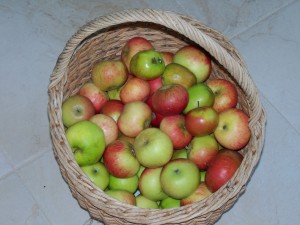 Apples will grow in most conditions but bear in mind that trees will be fruiting for a considerable number of years. Give them the best possible start by picking a reasonably sunny and sheltered spot that is clear of any frost pockets (late frosts may damage the blooms of early-flowering varieties). The soil should be free-draining and definitely not waterlogged or too shallow. Aside from these simple demands, apples will grow in most soils, so long as they are not excessively alkaline or acidic.

Prepare the soil well in advance and at least a month before planting by digging it over and adding plenty of well-rotted manure or garden compost to the planting site. The ground should then have enough time to settle down before the tree is moved to its final growing position. Aim to prepare an area of soil that’s at least a metre in diameter and 60cm deep as this will give your tree plenty of well-prepared root space. If you want to plant freestanding apples in a lawn, then prepare the ground as described but add an extra boost of nutrition by working in a few handfuls of bonemeal at the same time.

Apple trees will either be supplied bare-rooted in their dormant state or as container-grown specimens. Container trees may be planted at any time of the year but bare-rooted types, while considerably cheaper, must be planted while the tree remains in its winter state, usually from October through to March (late autumn provides the optimal time to get them in the ground). Order your fruit early – September is the perfect month to do so – as you’ll be getting first dibs on the fullest selection of varieties. Opt for a two- or three-year-old tree as these will already be partly trained.

Planting in the open ground involves digging a hole into the prepared soil that is large enough to accommodate the roots, then simply positioning your tree, filling back with soil and firming it in to make sure that the earth is in complete contact with all the roots and that there are no air pockets which might cause the tree to rock in the wind. There are a number of other considerations too. Firstly, do not add any extra fertiliser at this stage as you will only encourage soft growth at the expense of fruit production. Secondly, make sure that the union between the rootstock and scion – which can be identified from the distinct bulge in the stem – sits about 10cm clear of the ground; taking care to match the new soil level with the level the tree was buried to in its nursery pot, or to the soil mark on its stem, will be a foolproof way of doing this.

Most trees and all varieties on a dwarfing rootstock (M27, M9, M26 – see box: Rootstocks) will need support. Before planting your tree drive a 5cm-diameter stake into the bottom of your planting hole so it sits at least 30cm beneath its base. Place it at a 45° angle so it faces the oncoming prevailing wind and site it about 7cm from the stem of the tree. After filling back your planting hole and firming the earth in, loosely connect a tree tie 10cm from the top of the stake to the stem of your tree. Tighten it up after a few weeks once the tree has settled in. As the tree grows and its stem thickens you will need to periodically loosen the tie to stop it from cutting into the bark.

Trees will need watering in dry spells, particularly as they are establishing and as their fruits begin to swell. Older and larger trees will be better able to cope with drought but apples in containers will always require a steady supply of water. It is worth applying a mulch of manure or compost in early spring to help retain moisture and suppress weeds. This will also rot down to add valuable nutrients to the soil. Before applying the mulch, sprinkle some general purpose fertiliser over the ground to cover an area slightly larger than the diameter of the tree’s crown, which will roughly mirror the spread of the tree’s roots.

Left to their own devices apples will form lots of fruit one year and fewer the next in a natural cycle of plenty then famine. Leave all fruits to grow on and you also run the risk of lots of apples but all of a small size. Young fruitlets naturally fall away in early summer during the ‘June drop’ but extra thinning can help. Begin by removing the central ‘king apple’ at the centre of each cluster of fruits as this rarely forms a pleasing shape. Then thin the remaining fruits to leave 10-12cm between apples of dessert varieties and 15-25cm between larger cooking varieties. Smaller trees such as minarettes and dwarf pyramids won’t need much thinning, so only remove fruits if it looks like you’ll otherwise have an excessively heavy crop.

There’s a simple, fail-safe technique for testing when your apples are ready for picking: cup an apple in the palm of your hand and gently lift it upwards while twisting at the same time. If the apple comes away readily from the spur then it is ready to pick. Never pull an apple vigorously from a tree, as this could cause damage. If you do harm any, eat them within a few days as they won’t keep successfully.

The earliest varieties of apple should be eaten fresh rather than kept over long periods of time. Late varieties that are specifically described as suitable for storage must be prepared before they are packed away. Wrap each apple in old newspaper and store the fruits in open trays. The newspaper will keep them dry and prevent the apples from touching and spreading disease. Always handle your apples with extreme care so as not to bruise them. Your apple store should be cool but frost-free, with minimal temperature fluctuations and devoid of strong-smelling paints or other industrial liquids that could taint the apples’ flavour. Garages, cellars or an unheated spare room make ideal storage spots. Check over stored apples weekly to inspect them for any signs of rotting or brown patches and remove these immediately as problems can spread rapidly between fruit kept in storage. Some of the best keeping varieties can be stored right through to April.

There are a number of ways to grow your apple trees, such as: wall-trained espaliers with parallel horizontal branches; single-stem cordons against wire supports; fans trained to fill a wall or fence; free-standing as a simple dwarf pyramid shape or as a more rounded bush tree. This section explains how to prune free-standing trees to create a space-saving dwarf pyramid. If you can only plant in containers or are looking for an even simpler alternative then try the compact columnar shape of minarette apple trees, which can be planted in the ground as close as 60cm apart. These have a vertical stem with multiple short, fruit-bearing spurs and will require minimal pruning. They are also available with more than one variety grafted onto the plant’s rootstock.

Dwarf pyramid trees will require pruning immediately after planting to encourage a good, even ‘Christmas-tree’ shape. Ask your fruit supplier for a ‘feathered maiden’ tree as this lends itself well to the formation of a pyramid. The central leader (the main stem of the tree) will need to be cut back to leave 25cm of growth. Make the cut just above a bud that is pointing in an upward direction. The other branches should then be pruned to 20cm in length – make the cut just above buds that are facing outwards and upwards.

The next pruning takes place in late summer when the bottom third of each new shoot has turned woody and the leaves have taken on a dark green colour, indicating maturity. The summer pruning process uses the ‘modified Lorette system’, which sees pruning only of shoots that are longer than 20cm. Begin by cutting back sideshoots emerging from new growth to just three leaves above the cluster of leaves closest to the stem (these are known as the ‘basal cluster’). Sideshoots emerging from older wood that has not been produced in the current year should be cut back to one leaf above the basal cluster. New shoots emerging after this summer pruning should be cut back to one bud in September. As well as completing this modified Lorette system of pruning, in this first summer’s pruning you should reduce the length of the main branches, other than the central leader, to six leaves above each branch’s basal cluster.

Subsequent winter pruning sees the central leader cut back to leave 25cm of last season’s growth to maintain its size, followed in the summer by the modified Lorette system of pruning.